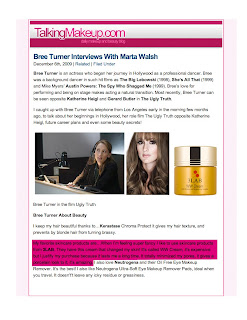 We were super surprised - and gushingly thrilled - find out that Hollywood Beauty Bree Turner is a 3LAB skincare fan. Imagine us, reading TalkingMakueup.com and seeing this:

Bree Turner is an actress who began her journey in Hollywood as a professional dancer. Bree was a background dancer in such hit films as The Big Lebowski (1998), She’s All ThatAustin Powers: The Spy Who Shagged Me (1999). Bree’s love for performing and being on stage makes acting a natural transition. Most recently, Bree Turner can be seen opposite Katherine Heigl and Gerard Butler in The Ugly Truth. (1999) and Mike Myers’

I caught up with Bree Turner via telephone from Los Angeles early in the morning few months ago, to talk about her beginnings in Hollywood, her role film The Ugly Truth opposite Katherine Heigl, future career plans and even some beauty secrets!...

"My favorite skincare products are…When I’m feeling super fancy I like to use skincare products from 3LAB. They have this cream that changed my skin! It’s called WW Cream, it’s expensive but I justify my purchase because it lasts me a long time. It totally minimized my pores, it gives a porcelain look to it, it’s amazing..."
- Bree Turner on TalkingMakeup.com

Bree, we're so glad that you like our WW Cream. That really means a lot.

Thanks so much Marta for the AMAZING interview!